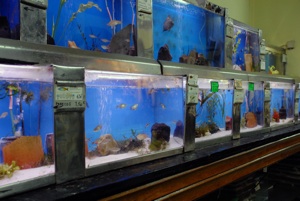 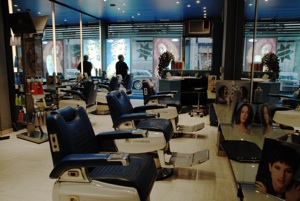 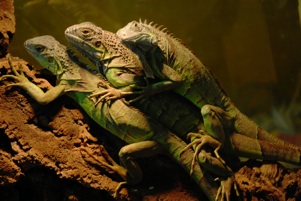 ZimmerFrei is a collective of three artists: Anna de Manincor, Massimo Carozzi and Anna Rispoli. On the 3rd of April Lars Kwakkenbos spoke with Anna Rispoli about the main ideas behind LKN Confidential.

What kind of portrait does ZimmerFrei want to present of Rue de Laeken/Lakensestraat by making LKN Confidential?
LKN is a deep plunge into Rue de Laeken and its commercial vocation, we wanted to discover the richness and variety of people and goods by asking the the shop tenants to be our guide for this journey.
The film deals with the present of the street, as well as its past: lots of shops are closed now, and new ones are opening.
Once we had isolated this little piece of Brussels, we realised that something was calling us from under the surface. You can call it a search for a hidden channel of knowledge, if you want. We imagined Rue de Laeken to be a ley line. The concept of a ley line comes from Alfred Watkins, an archeologist who formulated it in the early 1920’s. According to this concept, which may sound a bit mystical, energetically dense monuments or places are connected by straight lines, leading the imaginative power from one place to another. One of these energetically dense places might be Park 58, a symbol of the dream of a modern Brussels. On the other edge of the street there is the frituur, an anchor point of Belgian identity. which stands at the border of Brussels and at the beginning of the way to Flanders, where many of the tenants want to live.
Standing on top of Park 58 you see the street as a straight line, from a point of view that reflects one of the late 1950’s and 1960’s. This perspective reflects the faith in the future, and the trust in commerce and economical development and in wealth. This belle époque was often evoked in interviews with the shop tenants. Most of the elder tenants started by saying that Rue de Laeken is no more what it used to be. By saying this they turned the era they were talking about into a beautiful ghost: it was chic, and shiny, everyone was going there, there were three flower shops…

You did the interviews. Which questions did you ask?
We asked them about the future. A lot. And then we asked them if they stole something from the past. Lots of these shops are passed on from generation to generation. Some of them are really old. We were curious about the relationship between different generations.
Our goal was not to make a documentary about the commercial past and present of the street. We wanted to give a different perspective, by having more intimate and confidential conversations with the shop tenants. As a client, in most shops usually you don’t really have time to spend, once you’ve entered them. Why would you stay there? You have to buy something, and then you have to get out. In our film there will be a expansion of time that you can use to smell and absorb the atmosphere of the shop. We just wanted to acceed to this privileged dimension and share it with the public. Within this dimension lies the only possibilty to start talking about life and asking questions you cannot answer. In a way we are using the experience of the shop holders to have our own research, to travel through the very special wisdom of rue de Laeken. Everyone is teaching us something, or revealing us a secret, even when they are not aware of it.

Most of the projects of ZimmerFrei are characterized by a complex concept of time. Can you tell a bit more about the concept of time in LKN Confidential?
In this film time is floating. We try to erase the overload of reality around, in order to reveal a hidden dimension. We would like to discover a secret place. Maybe it doesn’t exist, but we start by suggesting it does. The idea is that for a while time is suspended in rue de Laeken.
Someone that we interviewed quoted Bergson: human beings are different from animals because they are aware of time and death. Of course this is a very Western point of view, but when one approaches Rue de Laeken, it may create an interesting perspective on its past and present. Commerce is action, money, things, objects, relationships, progress. You believe things will be better and you have to work for things to be better.

In the sixties the dream seemed to be perfect. Nowadays we proclaim a different idea. The faith that the dream might be furfilled, seems not so sure anymore, there are at least some holes in it. We are fascinated by the fact that this dream is still so present though. When you want to believe in the future, or hope there will be progress and that your children will have a better life, it is the only ghost you can easily attach to. When Bergson suggests that we are special because we can conceive our death, we try to imagine Rue de Laeken as a place that embodies this wisdom. What happens if time stops? If time doesn’t exist anymore, if it doesn’t move in a linear way?
Another question that we tried to ask – and this was a very difficult one – was: can you imagine your world of things without you? Can you imagine how this world will exist and evolve without you? Will it continue to exist, will it disappear? This was difficult to ask, of course, because it evokes the big taboo of death. It was not death itself though we were interested in. What interests us, are the traces. The sticky resistance of time. The fact that your passage leaves traces, you move things, you change stuff. How does your existence become a shape, and how can this shape be taken over by someone else?

You have already used two times the word ghost. What do you mean by this?
Traces of the past, as well as imaginations towards the future. The faith in the future is a ghost for me. It is like shapes you give a name to, in order to project your moral strength, hope, desires, imagination… on. It is like shapes on which you project immaterial things.

That might bring us on the topic of film.
I am not sure all the shop tenants will recognize themselves in this film. We see what you usually don’t have time to observe in their shop. And we’ve put some very special sunglasses on (laughs). In fact it became a fiction movie. You get into a different universe. We don’t make traditional documentaries. We don’t tell the truth, we are liars. Our strategy is a poetical one.

It sounds a bit as if you would like to turn the reality of the Rue de Laeken into a dream. Can this dream in its turn have a social power? Can you change society with it?
No, of course not. Whoever makes such a dive in reality, sees a different perspective.
Last year, by turning the facade of two building blocks next to the Brigittines into a concert of lights, switched on and off by the people living there, it seemed as if you wanted to change a little part of society as well.
Now you’re talking about the work of Anna Rispoli. The work of ZimmerFrei is different. First of all because of the medium we’re working with. Film is something different than public art. Secondly, we are a collective, which means that the emotions that influence our work are different. A project of ZimmerFrei is less one on one, therefore less based on intuition, and more reworked. And finally, we don’t make work that directly engages people.
The three of us come from a political experience we had together. We were squatting together and we were engaged in political and social actions. And because we did all this, our art didn’t need to be political. In Italy during the nineties the Centri Sociali were the main place to produce underground culture. Back then you had to separate things. If you did not, artistic practices could easily become charged with political messages of others. Nowadays the situation is completely different, but with ZimmerFrei we still do not make political art.

You don’t change society with the work of ZimmerFrei. Do you change reality?
Yes, for sure.

Is there anything more you would like to say about the project?
Yes. Although they are a sound archive, Bruxelles Nous Appartient – Brussel Behoort Ons Toe accepted to coproduce and host LKN Confidential, which also contains video. We had a very nice exchange about what the oral history of a city is, and I was very touched by the sensitivity of the work they’ve done up till now. With images you can go fast, with sound you can’t. If sound goes fast, you can’t follow. Oral history embodies a form of resistance.